With the much anticipated US launch of Spotify and the successful IPO of Pandora there’s a very palpable sense of momentum in streaming music.  And that’s great news, the future of music revenues will depend upon a successful transition from distribution based models (downloads, CDs etc) to consumption-era models (on-demand streaming etc.).  Yet, there’s a growing sense that the current Freemium business model just isn’t fit for purpose.

I’ve written before about the challenges of squaring the consumption circle (see my post here for more).  There is a direct tension arising from record labels feeling they don’t get enough from ad-supported music, and from the services themselves feeling that they actually pay too.  To complicate matters even further, it is becoming increasingly apparent that artists aren’t getting enough out of ad-supported music either.

Singer / songwriter Benji Rogers of Marwood (and who also happens to be the founder of the great direct-to-fan funding music site Pledge Music) generously offered to share his digital revenue data to illustrate how his income spreads between different music services.

Looking at Benji’s digital music revenue for March and April (see figure 1) the glaring disparity between download stores and streaming services is immediately apparent.  In terms of units of activity (i.e. a stream or a paid download) streaming services are way out in front, with 92% of total units for the period, yet in revenue terms the relationship is reversed, with them accounting for just 3% of total income.  (You can read more about Benji’s digital music income here).

Now of course streaming based services are always going to generate a significantly lower unit of income than a download, but the inverse income-to-unit relationship here is misaligned to the extreme.

What Happens If / When Downloads Go Away?

The other side of this equation is the vastly important role that downloads play in artists’ recorded music income. The download revenue is effectively bringing the income dynamics of the old CD model into the digital equation.

But there is also massive risk with the download dependency.  Download sales growth is slowing and there is little evidence that the 99 cents download model translates well outside of the iTunes ecosystem.  Worse still, the current momentum in digital music business models and behaviour is in streaming not downloads.  Take a look around: Amazon, Google and of course Apple have all jumped on the locker bandwagon.  And as Benji’s data illustrates painfully well, streaming is where consumers are going too.  While downloads may not disappear entirely, their role is set to lessen markedly in the midterm future and most of the alternatives in play from the big three players generate much lower income for artists.

And to be clear, this isn’t just a problem with Freemium.  Streaming services as a whole just aren’t delivering enough income for artists.  Spotify is much maligned for the raw deal it is perceived to give artists, yet when you look at the average-pay-per stream Spotify actually pays out more than that darling of premium services Rhapsody (see figure 2) despite the majority of Spotify’s streams being ad supported rather than premium (something feels broken there).

The simple fact is that the disparity between paid downloads and streaming is unsustainable.   It just isn’t tenable that 3 paid downloads from Amazon can still deliver 50% more revenue than all the streaming services combined over the same period and yet have less than 1% the activity level of those services. 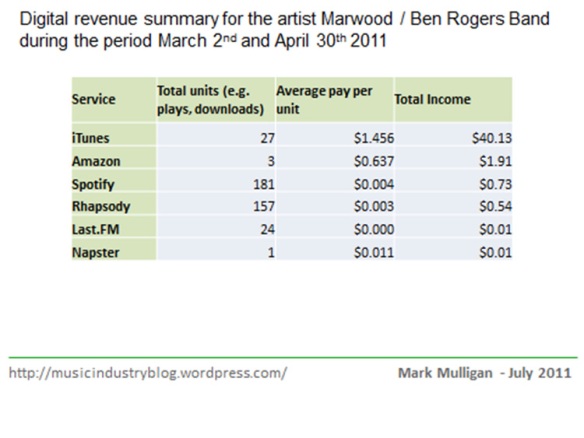 Is Freemium No Longer Fit for Purpose?

No one in the Freemium value chain thinks that they’re getting enough income: not labels, not publishers, not artists, not the services themselves. It looks increasingly like the Freemium model itself is fundamentally flawed, that any fix will do little more than paper over the cracks.  And the new wave of locker services are only marginally better.  They share the same fundamental revenue share dynamics when compared to download income (for all parties).

So what is the answer?   As I said in my June Midem post (click here to read more), first and foremost business models and products must be innovated.  There simply aren’t enough levers left to pull in the ad supported streaming business models to fix the problem.  That doesn’t mean that services such as Spotify, Pandora and We7 don’t have a future, they absolutely do, but their future lies in successfully bringing in business partners to subsidize  premium tiers of their businesses to make music feel-like-free or close-to-free for  mainstream customers (see my previous post on Digital Music’s Third Way for more on this).  Spotify’s US launch will bring a great new music experience to US music fans, but Spotify will need partnerships like it has struck with Virgin Media, 3 and Telia Sonera in Europe if it is going to be sustainable.

But most importantly we need a new generation of music products that leverage social, user participation, access models, multimedia and device connectivity to the full.

Ad supported streaming can evolve, it doesn’t need to be the Neanderthal of digital music’s evolutionary chain, but unless evolution happens quickly there is a very real risk that many artists will start seeing their recorded music careers face extinction.