As the market collectively holds its breath in anticipation of Facebook’s much (over?) hyped music service launch this coming Thursday, it is instructive to take stock of where we are at the moment to better understand the eager expectation.

Digital music is stuck in a rut

At the start of the year I made a speech at Midem, positing that digital music was at an impasse.  Now, with the best part of a year gone, it still is. Granted we’ve had some important and encouraging developments (Spotify’s US launch and 1 million+ paying subs and Pandora’s IPO among them) but the fundamentals remain unchanged (see figure): 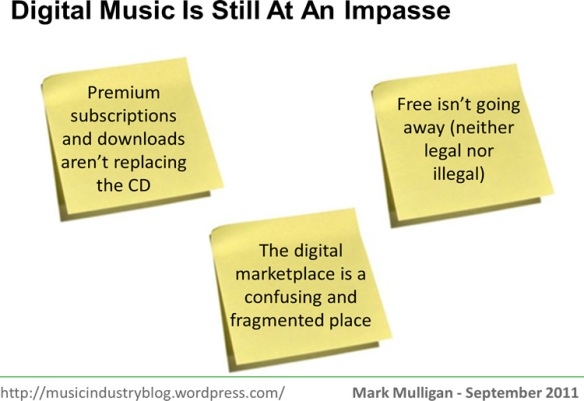 And this is where Facebook comes in.   As I wrote earlier this year, it doesn’t make any sense for Facebook to try to ‘do a MySpace’ or for that matter to ‘do a Spotify’ or ‘do an iTunes’.  Facebook is becoming a launch pad for our online lives just as Google is.   But whereas Google largely gets us to places we don’t yet know, Facebook is what (and who) we do know.  And in that lies a massive asset for digital music and an even larger platform for Facebook’s future growth.

I expect Facebook to join music’s digital dots and become a social dashboard for digital music activity.  By plugging our music activity into our social graph Facebook can both enrich those services and tap into the tastes of our friends.  The net result will be a richer digital music experience across multiple services and – most crucially for Mark Zuckerberg – one more reason why we’ll want to stick with Facebook when the Facebook-Killer finally raises its long overdue head.