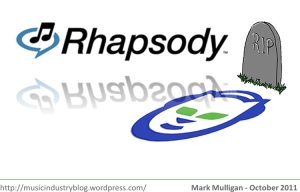 Rhapsody yesterday announced the acquisition of long term rival Napster from US retailer Best Buy.  Rhapsody will retire the Napster brand and migrate the customer base over to its own service, with Best Buy gaining a minority stake in Rhapsody. It is a somewhat poignant end to one of digital music’s old guard, going out with a whimper rather than a bang.

The acquisition will give Rhapsody an important boost in scale at a pivotal time, namely as Spotify aggressively grows its US subscription business and simultaneously disrupts the entire market with its introduction of free on-demand music to the US market (a ship which of course MOG and Rdio are also busy jumping on).

In the near-term the Napster acquisition will put more clear water between Rhapsody’s subscriber count and Spotify’s.  It should also grant Rhapsody membership of the the ‘1 Million Club’, with its 800,000 subscribers swelled by a few hundred thousand from Napster.  The last time Napster reported their numbers in December 2008 they had 700,000 subscribers.   After three years in the Best Buy wilderness and shifts towards bundled download products I estimate there to be no more than 400,000 fully fledged subscribers left, probably more like 300,000.

But Rhapsody will be keenly aware that even keeping hold of just 300,000 subscribers will be no mean feat. They will remember keenly the 2008 acquisition of Yahoo! Music’s 400,000 subscribers and their rapid disappearance into the ether.  Napster will also recall the similar magical disappearing trick of the 350,000 AOL Music Now subscribers they acquired in December 2007 for $43 per subscriber.  In the business of acquiring music subscribers 2+2 too often = 2.5.

Rhapsody’s President Jon Irwin said of the acquisition that “scale is extremely important in this business.”  He is of course entirely correct.  Rights fees leave little in the way of margins.  For sake of full disclosure I’ve been a very long term fan of Rhapsody, right since their earliest days. It was partly our experiences of Rhapsody that led myself and my former colleague David Card to be so bullish about music subscriptions when we were helping build the Jupiter Research digital music forecasts.  But the time has come for Rhapsody not just to change but to drive change.

The digital music market is a different world from that Rhapsody was built for.  Unless Rhapsody wants to be limited to spending the next year or two simply trying to stay one subscriber ahead of Spotify it needs to overhaul its product roadmap.

I’ve long advocated that if the record labels really want to ensure the extant premium subscription services don’t become extinct that they must empower them with dramatically more powerful licenses: namely unlimited MP3.  Of course it will be a good year or two more of global music revenue decline before the labels hurt enough to really countenance unlimited MP3, but Rhapsody needs it now.

So what can Rhapsody do in the meantime?  Well they’ve already got great discovery and editorial etc. so it is not really the experience they need to fix, rather the entire value proposition.  They need to ask themselves ‘what do we want to mean to consumers in the Spotify age?  What can makes us dramatically and unmistakeably different?’  Unless they can really address this fundamental question Rhapsody will face the very real prospect ending up looking like Spotify’s stuffy old uncle, which would be a criminal insult for the Grand Old Lady of digital music.