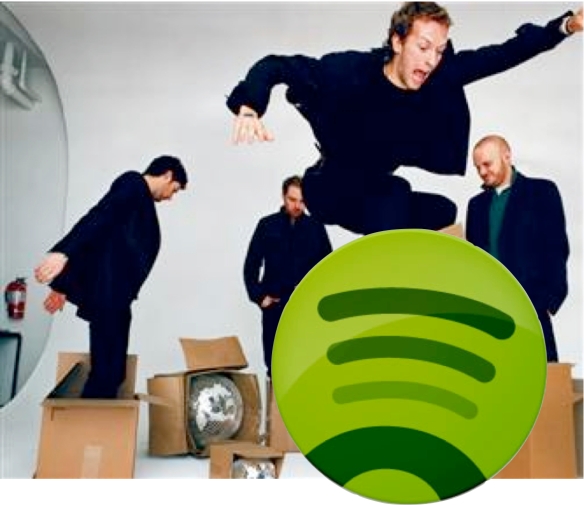 Coldplay have opted to not have their latest album Mylo Xyloto made available on streaming services…all of them, though of course Spotify is the core motive for this move.  It is yet another thrust of the wedge which is inserting itself between the streaming service and artists.

Coldplay – with apparently begrudging support of their label EMI-  have made a business decision that they would prefer to have a smaller number of people listening to Mylo Xyloto to ensure that a larger number of them are buying it.  The problem with Spotify is that it generates so little income per activity to artists compared to downloads, but this is not just a Spotify issue.  In my earlier post showing PledgeMusic’s Benji Rogers’ digital income I showed how the average pay out per activity for streaming services (premium ones included) is over 300 times smaller than the average pay out per activity on iTunes.   Now to be clear, we are not comparing apples with apples here (no pun intended).  An activity on iTunes is a one-off paid download, whilst an activity on a streaming service is one stream and that play could occur multiple times for the same song.  Yet it still leaves a rather large number of plays required before you start catching up with an iTunes pay out.

So what is broken with the model?  Streaming services already feel that they pay out too much to rights owners: services typically pay out in the region of 80% of their income to rights holders. So increasing their royalty payments would likely put many services out of business, unless of course they hiked their prices. But 9.99 a month is a hard enough sell as it is, let alone anything higher.

So where is the money going? Here are three possible scenarios:

The likelihood is that all three scenarios play a role.  I don’t believe that any party, Spotify or the labels included, have intentionally embarked on strategies to cheat artists out of money.  But there is a distinct possibility that not all involved parties are exactly incentivized to plug the holes in their processes to thus bring the increased accuracy and effectiveness which could result in larger artist pay outs.

The waters are further muddied by major labels becoming stake holders in some digital services, raising the prospect of portions of income from those services being joint venture income and therefore not subject to reimbursement to artists.  Add to that the issue of the large advances services have to pay labels in anticipation of actual revenues, how much of that is paid to artists, and when, and especially if the service doesn’t ever generate the income guaranteed by its advance.

All these are valid issues that would benefit markedly from an open dialogue across the value chain.  Spotify is left looking like the pantomime villain but is likely no more than a cog in a machine that nobody seems to really want to fix other than the artists.

But fixed it must be.  Spotify and YouTube massively outpace most other digital music services in adoption and usage, yet they deliver a tiny fraction of the income.  Artists cannot afford for these services to behave like radio (i.e. the tool to drive sales) when they are also becoming the end product for many music fans.

The case is clear for a transparent and robust dialogue between labels, artists and services.

Coldplay have the benefit of being big enough to dictate terms.  Most other artists don’t have that benefit.  Greater transparency, effectiveness and accuracy in revenue reporting and distribution will help drive not only artist trust, but, via increased income, greater support too.  The alternative is that piracy gets another free shot at goal, which is what Coldplay have already likely delivered, driving many Spotify users back to Torrents to find Mylo Xyloto for themselves.

12 thoughts on “The Awkward, Unanswered Questions That Led to Coldplay’s Spotify Embargo”