You may have noticed the unattractive furore surrounding Adele’s contest with Lady Gaga to become the biggest selling artist of the year.  The momentum appears to be with Adele, with her hugely successful ‘21’ album yesterday becoming the first ever album to sell more than 1 million digital copies on iTunes in Europe.

But the simple fact is that albums are no longer the definitive marker of success that they once were.  The shift from the distribution era of the album to the consumption era of the stream and the download have seen a shift from buying to free, and from albums to singles.  The download store allowed music buyers to deconstruct the album into cherry-picked bite size chunk; file sharing enabled people to stop buying albums altogether; and streaming let fans assemble single tracks into their own personal albums (i.e. playlists).

The digital transition makes a case for new measures of success

Income from live, merchandize and other sources have been becoming increasingly important for artists and yet we still measure an artist’s success in terms of how many units of music they sell.  Live revenues are certainly one measure, and of course radio.  But Facebook likes and YouTube views are becoming an increasingly important indicator of success also. And yet, measuring success is not as simple as choosing between one metric or another.  The music industry is in a transition stage, as is consumer consumption of music.  Thus we have a mixture of artists ranging from those that are clearly of the digital age and those that are transition artists, who are entirely contemporary artists but are more at home on a CD than they are YouTube.  I’d put Lady Gaga in the first camp and Adele in the second:  just as measuring Adele solely on her YouTube views would miss the mark, so measuring Lady Gaga on album sales alone would miss the mark.

The chart directly below illustrates the point further.  Here artists are mapped according to their total YouTube views and total Facebook ‘Likes’, with the bubble size representing the total number of albums sold globally.  I have picked a sample of artists that are, or have been, top tier and that represent a range of different artist career models.

A number of trends become apparent:

Many, rightly, think of YouTube and other free streaming services such as Spotify and Pandora as promotional and discovery vehicles, a digital equivalent for radio.  And yet they are also much more than that: they are increasingly the ends as well as the means.  The chart below shows the number of albums sold per YouTube view.  Cliff Richard’s rate dwarves the rest because his peak was in the album era and his remaining fans aren’t exactly widespread among millennials. But the overall trend is nonetheless compelling: for the true ‘YouTube Generation’ artists, the ratio is dramatically weaker than for album artists. 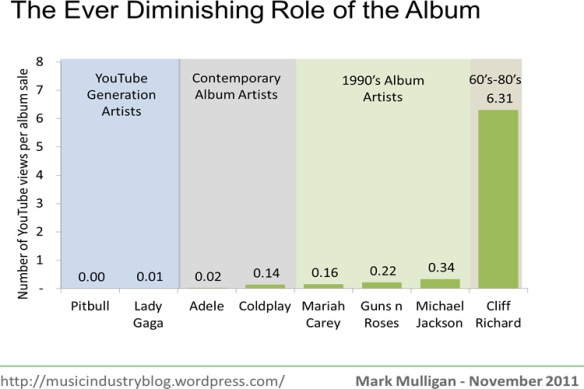 6 years ago Paul Myers – then CEO of Mp3 download store Wippit – told me that “rock n’ roll was dead”, that the last great album was ‘Thriller’ and that we would never see an album that successful ever again. I was sceptical at the time, but those words are appearing ever more accurate as each year passes.  Looking at the first chart above it is clear that no artist is ever going to come close to selling the amount of albums Michael Jackson did.  But artists will still be successful: we will see artists break the 2 billion YouTube views and we will see artists break the 100 million Facebook ‘Likes’.  As this transition phase continues to play out, artists will evolve how their careers work and the industry will increasingly have to change how it measures their success.  Companies like Music Metric are already starting along this path and the traditional sources of measurement such as Nielsen and the Official Charts Company are also evolving their approaches.  These shifts are crucial, because measuring an artist’s success isn’t just a marketing trick, it is the litmus test with which their fans relate and by which history will remember them.