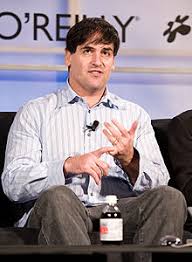 In our latest ‘In Conversation With…’ (click here to see previous editions) we talk all things music TV and video with legendary media, sports and business entrepreneur Mark Cuban.  Known for his forthright views, Mark has spent the last couple of decades building successful businesses in the media and sport arenas and is currently Chairman of AXSTV as well as being the owner of Landmark Theatres and the Dallas Mavericks.  Today we are going to talk to Mark about the role of music TV in today’s music industry.

Music Industry Blog: Mark, welcome to Music Industry Blog. You’ve got a long and proven track record in the media space and in your time you’ve seen a lot of things come and go.  What are your thoughts on the current state of the media industries in general, and how they are grappling with the challenges of the digital age?  And do you think any particular industries are doing better than others?

Mark Cuban: The entire media industry is a digital platform where we all try to meet consumer demands and anticipate future opportunities. I think that mobile is obviously growing quickly for all media formats, but TV is outperforming anyone’s expectations as it improves its digital platform to exceed that of the open internet and I don’t expect that to change at all. I think web based, non-mobile content will be challenged because of the decline in sales of PCs.

I think music has a chance to revitalize as new opportunities beyond the download present themselves. In particular, I think we will see a significant increase in the number of PPV concerts. There is no reason why one or more concerts on a tour can’t be presented to PPV audiences. It’s found money and easy to do.

MIB: One of the most important differences between music consumption now compared to the analog era is context.  Music fans increasingly want a rich, multimedia experience where they see and experience an artist and their story, watching music videos, reading interviews, browsing photos, chatting with their friends online.  YouTube is now the world’s most popular music service.  Why do you think video has become such an important part of the music experience, and why do you think TV still has a role to play?

MC: Music is obviously incredibly social. People are passionate about their music and they want to share it and talk about it.  TV is the only medium that is zero latency. It allows everyone to Tweet/Tumblr/Facebook/whatever to each other while having the same experience. When someone just downloads a song or video, it’s an individual experience. 500 million people downloaded GangnamStyle, no one had a shared experience while they watched it for the first time.

Turn on any TV show, music or not, and there are thousands of people sharing the experience.  When I started on Shark Tank I decided to Tweet my experience of watching the show the first time (I don’t watch the show prior to airing) . Turns out I was the first on a TV show to do so and SharkTank immediately started trending.

People will share in real time their experiences when they are watching live TV if they are passionate about the experience. There are few things that bring out the passion in people more than music.

MIB: What do you think will happen to the linear scale from broadcast music TV to online music video, particularly for live music events?

MC: Online music video will always be there for those that missed it live. Online won’t ever be as strong an experience because of the lack of real-time communal experience, it will in fact reinforce the value of live music events as people read and see what they missed from the community

MIB: Over the last couple of years we’ve seen a proliferation of social apps and sites like GetGlue, Flixster and Zeebox that aim to support social dialogue around programmed media.  How do you think social extensions to TV viewing translate to the music TV model?

MC: I don’t really think they translate all that well for any experiences on TV. They require too much work on the part of viewers. Twitter/Facebook/Tumbler are already more than good enough. There isn’t a need for a specialized TV app.

MIB: With the ever growing popularity of online video there is a growing concern that it may be eating into potential music sales or streaming music subscriptions.  Are there similar concerns for live music video?  Just how much does music TV matter to people anymore?  Is music TV for people of ‘a certain age’ while YouTube is for the Digital Natives?

MC: I think it’s the exact opposite. I think YouTube is for those that missed what happened. Young kids today are all about the event. If you can’t make it to Coachella you want to watch it live. Right now that’s online with YouTube simply because that is the only way to get it. AXS TV will change that. If you can’t make it to StageCoach, EDC, Budweiser Made in America, it’s cool to catch up on what you missed, if you feel like you missed something.

But what is going to happen with AXSTV is that these festivals and concerts will be “eventized”. They will be more than just aTV show. It will be everyone at the concert and those watching all sharing in the experience through social media. It’s no different than a sporting event. You can’t replace the energy of being at an event , but you sure can do quite a bit to make people who are passionate about the music want to be part of it in real-time.

You go to YouTube to catch up, not to participate. We are making TV event driven. AXS TV is going to evolve to all live all the time. Live Live is our slogan. It’s not that we are going to prevent people from watching live online in the future, but the best experience and the most participatory experience will be on TV.

MIB: One of the problems music has faced over the last 15 years+ has been competing for time and wallet share with other media, including TV itself.  Music just doesn’t seem to have been able to compete on an equal footing.  Of course the ubiquitous availability of free music has been key.  But in this new hierarchy of media consumption, is music itself enough of a pull for TV programming for any age group anymore?  What else needs wrapping around it?

MC: I think live concerts will be like sporting events. They won’t pull huge Shark Tank like numbers on a Friday night. They will pull NBA or MLB game demo type numbers for live concerts , with huge social relevancy and participation things advertisers love.

We want artists to be broadcasting multiple stops on their tour on AXS TV and to turn their concerts into events that extend beyond the stage and arena and into homes. That will require change, but in turn it will increase the revenue opportunities for everyone in the music chain.

We want viewers to know that when they read something on twitter about their favorite band or celeb that the one place they can turn to immediately and see what is going on is AXS TV. Again, our goal is to be 100% live, 100% of the time.

MIB: Good stuff, thanks for taking the time to speak to us Mark.

And here are a few links if you want to learn more about AXS TV and some of Mark’s other ventures:

4 thoughts on “In Conversation With Mark Cuban”