(NOTE: you can download and keep this blog post as a pdf report by clicking on the report image at the bottom of the page)

Psy’s ‘Gangnam Style’ might have catapulted the South Korean music market into the global consciousness but to industry observers like myself it has long been a market of particular interest.  Being the first major music market to pass the 50% digital mark – in 2006 – South Korea has been held up both as a digital trailblazer and as a canary in the mine for the global music industry.  Strong growth over recent years hinted at a brighter international future, but just as ‘Gangnam Style’ was propelling South Korean music to unprecedented global heights the South Korea music market went back into decline.

The South Korean music market is one of contradictions and idiosyncrasies, but crucially it also holds many lessons that the global music market would do well to pay heed to

According to the IFPI’s invaluable Recording Industry in Numbers, South Korean recorded music revenues declined by 5% in 2012, breaking a run of four years of successive growth. But unlike the global market, it wasn’t the CD that was to blame for the fall but digital.  Physical revenue grew by 19%, the third successive year of growth, while digital actually declined by 25%, dragging the entire market down with it. The mirror opposite of the global music market where 7% digital growth wasn’t enough to prevent a 5% physical decline drag down total revenues by 1%.

2012 wasn’t the first year that South Korea stood out from the pack though, indeed the last 13 years have been vastly different from the global market (see figure):

A Tale of Booming CD Sales and Tumbling Download Revenues

There is no single explanation for the unique picture that South Korea’s last 13 years of music history paints, but there are a few key factors:

Lessons for the Global Market

South Korea is a truly unique music market and, just as with Japan, one has to tread carefully when attempting to project trends onto western markets.  But even with that caveat there is clearly much that can be learned from the South Korean experience:

But perhaps most importantly of all, just like in the disclaimer of a financial services advert: music revenues can go up and down.  Even when a market eventually starts to grow again, don’t expect that to mean that the corner has been permanently turned. 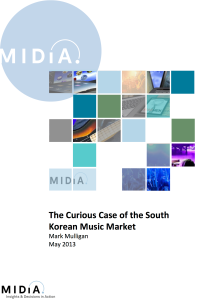