I enjoy our occasional Twitter exchanges and last night’s about MIDiA Research’s new music forecasts was no exception. For the record, I believe you deserve great credit for engaging as much as you do on Twitter. But as valuable a platform as Twitter is, it is not the best environment for discussing more complex and nuanced issues so I wanted to take this opportunity to build out from our conversation.

Your comments revolved around MIDiA’s estimate of the global ad supported music audience, which you think is lower than it should be at 202 million. I am really pleased you have picked up on this audience number. Part of what we are trying to do at MIDiA is educate the music industry to think less about Average Revenue Per User (ARPU) and more about how many people are actually engaging with digital music services. The audience-first approach has served the TV industry well and there are many lessons the music industry would do well to heed.

When Active Is In Fact Anything But

The accepted standard for measuring audiences of digital B2C companies is to look at regular users, typically considered as ‘at least one activity during the last 30 days’. If you are a marketer looking to understand the reach of different platforms then this is a perfectly adequate measure. It is similarly useful if you are a company trying to communicate value to advertisers or if you are a start up looking to demonstrate success to potential investors.   However it is the motives of the latter two groups that can lead to problems, especially in the ad supported music space.

For example most people take it as read that Pandora’s c.80 million regular users are monthly users. However Pandora’s imaginative definition for active users is: “…distinct registered users that have requested audio from our servers within the trailing 30 days to the end of the final calendar month of the period.” Which means that for quarterly accounting that can refer to up to a 120 day period, or for monthly accounting up to 60 days. Thus a user that plays just 30 seconds of one song in a two months period would be classified as a ‘monthly’ active user. That might serve Pandora’s purposes well but it is far from a useful measure for objective observers and vested interests such as songwriters and publishers. (Spotify of course defines active users using a straightforward 30 days measure). Another problematic trend is music services that classify active users as those that open the app rather than playing a song.

Why ‘Real’ Regular Usage Is So Important For Understanding YouTube

When we were building the MIDiA forecasts we were particularly concerned about YouTube. Music is crucially important to YouTube but it is not a music service. So, not only is a regular YouTube user not necessarily a music user, an occasional-but-monthly YouTube music user is not necessarily a music consumer in the way an occasional-but-monthly Spotify user is. Somebody who downloads Spotify does so because they want to listen to music, end of. Someone who, for example, watches a ‘Gangnam Style’ video that appears in their Facebook timeline is by no means guaranteed to be an engaged music fan. The highly diverse nature of YouTube’s content means that music can be a very small part of the 6 hours average monthly viewing of a YouTube user. Especially when you consider non-music videos from the likes of PewDiePie and SkyDoesMinecraft each average over 20 minutes. In short, the occasional-but-monthly YouTube user is less likely to be an engaged music fan than an occasional-but-monthly Spotify user.

So we decided to define regular users for YouTube as those who watch 20 or more music videos a month, which translates to about 5 a week and less than a fifth of the average YouTube user’s total monthly YouTube time. We did this because we want to provide the music industry with metrics that have actionable value. YouTube’s total music video audience is probably somewhere in the region of half a billion but less than half are regular users. Apple’s iTunes audience is c850 million only but only 200 million or so are music buyers.  Big numbers look great on Powerpoint slides but they don’t help make good business decisions if they are not truly instructive.

Not All Active Users Are Created Equal

Of course, the ideal starting point for measuring different audiences is to apply a standard definition, but as we have just seen, this is not always best route to take. Particularly if you are trying to demonstrate where the value in digital music lies for each part of the value chain. For example, a regular download buyer, when defined as those who buy at least monthly, spends around $2 a month. As an artist, if one of those tracks was yours you might get $0.15 from that 1 infrequent regular user, while if that song was streamed 20 times by a infrequent regular Spotify user you might get $0.03, and if it was viewed 20 times by what would have to be a frequent regular YouTube user you would probably get around $0.01. An infrequent regular iTunes customer in this scenario is thus 15 times more valuable to an artist than a frequent regular YouTube user.

Scale Matters If You Do Not Have It

All of this might sound a little esoteric but it does matter, especially to artists, songwriters and smaller indie labels. If you are a big label, or indeed a music service, it is the total revenue that matters as you are effectively guaranteed a meaningful share of it. But if you are an artist, songwriter or small indie, your plays will be just a tiny share of the regular audience’s behaviour making it far harder to make meaningful money out of those users than it is from infrequent download buyers. While its great to see Calvin Harris and Avicii each clock up 1 billion Spotify streams, this feels more like a confirmation of my ‘long tail is dead’ theory rather than signs of a ‘high tide rises all boats’. If you are a big artist or label you have scale and you benefit from the scale of even infrequent audiences. For the rest, an infrequent user audience has little import, particularly as those users also skew towards the big hits. 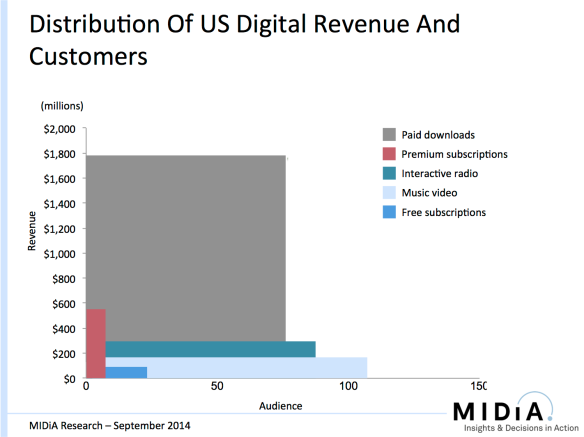 Like I said, I am really glad you’re focusing on the size of digital music audiences – I wish more people would take the same interest. Indeed if you look the chart above – which shows the audience of each type of music service mapped against the revenue – you can see that there is currently a huge imbalance between revenue and audience. This is exactly why I want the industry to focus on audience first and revenue second. In fact if we were to take the looser (bigger) measurement of YouTube’s audience it would make my point even more firmly.

So thank you once again Daniel for helping highlight the importance of audiences and hopefully I’ve gone some way to explaining why MIDiA decided to measure YouTube in the way we did. Though I have to say I am intrigued as to why you showed so much interest in the ad supported audience over all others? I do hope this doesn’t hint at a stronger focus on ad supported to come for Spotify. You have done a fantastic job at kick starting the subscription market and I know it is hard work, but if anyone can make premium subscriptions work at scale it is you. Though I totally get that you also need to highlight how much oxygen YouTube is sucking out of the marketplace – something I think you and I are in violent agreement on.