The plight of artists and songwriters grappling with download dollars transforming into streaming cents is well documented and a series of long term, sustainable solutions are needed (I wrote about some here). The debate occurs alongside an assumption that there is widespread concern for the creators’ and their livelihood. Unfortunately the general sympathy that is apparent within the echo chamber of the online press and social media does not translate to the broader population

In a recent MIDiA Research survey we asked consumers the following question:

“Some singers and bands are concerned that streaming music services like YouTube, Spotify and Deezer pay too little money back to them compared to selling music. Using a scale of 1 to 5 where 1 equals ‘do not agree at all’ and 5 equals ‘agree entirely’ indicate how much you agree with this statement: This issue concerns me enough to reconsider my music buying habits.’

Just 15% of respondents said they agreed and only four per cent strongly agree. And this is against a backdrop of 60% of consumers stating that they consider music to be worth paying for.  So willingness to pay is not the overriding issue here. 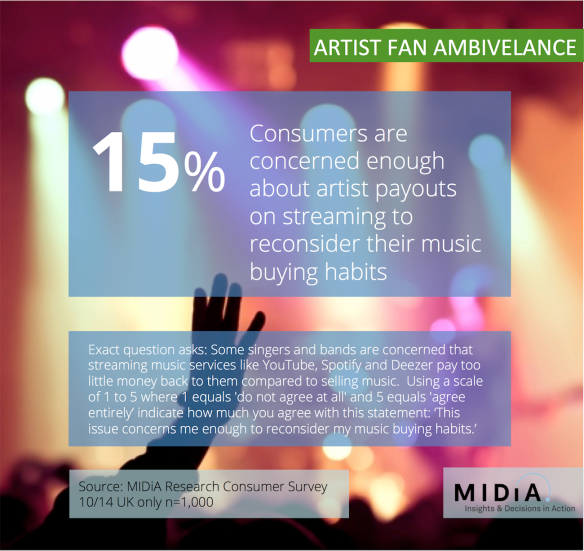 Things don’t look quite so bad when you start diving into specific segments. For example among Music Aficionados – those who spend and listen above average – the rate is 30% and among subscribers it is 34%. But even those rates are remarkably low when you consider that these are some of the very most engaged music fans and that more than 80% of them think music is worth paying for.

So what is going on? Artists and fans are closer than ever before and artists are undoubtedly finding the transition to consumption models a difficult process. To some degree there has always been some fan ambivalence. Mainstream consumers tend to think of artists as megastars who drive around in sports cars and sip champagne for breakfast. So getting the mass market to feel sympathy is not an easy sell. Even though the music world has changed from its 80’s and 90’s excess, many consumers just haven’t paid enough attention to the plight of artists to join the dots. Others conveniently turn a blind eye and use their old-world stereotypes to justify piracy to themselves.

Artists and fans have an unprecedented array of tools and services to connect them and to help build genuine engagement. But outside of their core followings, artists should not expect their wider fan bases to have any particularly strong feelings about their struggles. Even less should they expect those fans to do anything about it: 54% of consumers specifically would not change their buying behaviour.

Streaming is ramping up fast, that much is clear, but even among those consumers just 24% care enough about the plight of artists to consider changing their behaviour. As bitter a pill as it may be to swallow, artists have to accept the fact that beyond their super fans, most consumers (and three quarters of streamers) simply don’t care whether streaming is making it harder for them to build and maintain a career.

27 thoughts on “Note To Struggling Bands And Singers: Sorry But Most Of Your Fans Don’t Care”