The following are excerpts from recent MIDiA Research blog posts.  If you’re not already signed up to the newsletter type your email address in the box on the blog home page and you’ll get analysis and data on the digital content economy straight to your inbox every Monday. 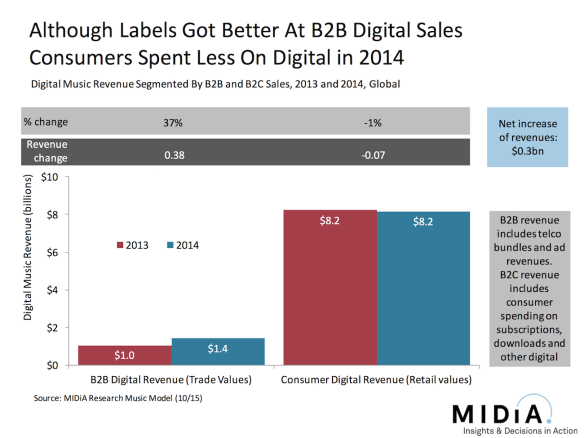 Spending money on recorded music has become a lifestyle choice, an honesty box for the conscientious consumer.  No one really needs to pay for music anymore.  That much is familiar to most, but what is new is that it is now manifesting itself in a new worrying way.  In 2014 consumers actually spent less on digital music than they did in 2013. Though the drop was small – 1% – it was still nonetheless a drop at a period when digital spending should be booming.  In some key markets the consumer spending decline was significantly larger, such as a 3% fall in the UK.  Of course, overall digital music revenue grew globally in 2014 but all of that growth came from the 37% increase in digital music B2B revenues, such as advertising income and telco bundles.  In short, the music industry is getting better at selling to businesses and worse at selling to consumers in the digital arena.

With B2B digital revenues 6 times smaller than consumer digital revenues the music industry is not about to suddenly become a B2B2C business.  But the direction of travel indicates that there is a problem.

The music industry has long been viewed as a canary in the mine for how media industries transition into the digital era.  In many respects that role has now been outlived.  Book publishers quickly realised that after a few short years they had moved beyond where the labels had got to in 10.  Meanwhile games publishers (mobile, console and PC) have learned how to monetize their super fans in a way the music industry could only dream of.  But it is the video sector that provides the starkest contrast.

The TV business is of course a vastly bigger one than music but it is, in years spent terms at least, at far earlier stage of its streaming subscription transition.  And yet already there are more than twice as many online video subscribers as there are music subscribers and the nascent online video subscription market is already bigger than the entire recorded music business.

Even discounting the relative scales of each business, the comparisons illustrate the contrast between what can be achieved with a niche product aimed at largely male, high spending super fans (music) and the reach a lower priced, more broadly targeted product can do (even with the hindrance of limited catalogues).