Regular readers will know that I recently published the Kindle version of my book “Awakening: The Music Industry In The Digital Age”.  Many of you have already bought it (thank you!) but some of you also wanted to know when the paperback edition was going to be available. Well you need wait no longer, you can buy the paperback version of ‘Awakening’ right now by clicking here.

I wrote this book with three key objectives in mind:

1.    To provide the definitive account of the music industry in the digital era, as an antidote the distorted picture that is painted by the biased and often poorly informed extremes that dominate the industry narrative

2.    To help anyone in the music business better understand how the other parts of the industry work, what they think and what their priorities are

3.    To act as a primer for anyone wanting to build career or business in the music industry, so they know exactly what they’re getting in to, how the business works, the relationships, the conflicts and what’s been tried before.  I want to help people not waste energy making the same mistakes others have, and to also benefit from the insight and experiences of the super smart people I interviewed in the book

The book is full of data, analysis and interviews with more 50 interviews with the CEOs, senior decision makers, artists, managers, start up founders and other decision makers that have shaped the music industry over the last 15 years.  It includes chapters on every key part of the industry (labels, artists, songwriters, start ups, tech companies etc.) and is split into three sections:

This really is the only book you need to read on the music industry’s digital transition.  But don’t just take my word for it, check out these 5 Star Reviews:

“I really enjoyed this book. It gives a wide view to music industry, consumption tendencies and much other useful information. Is a must for all of the music industry professionals.”

“Great book on today’s digital music business – how we got here, who did what and most crucially why they did it. There’s no shortage of firmly held opinions and theories about the music industry and how it has navigated its digital transformation and Mulligan’s book is an essential analysis of what’s actually been going on. Insightful, non-judgemental and very well researched and informed, if you want to understand today’s digital music business, read this book.”

And if you’re still not convinced, take a read of the sample chapters on Amazon.  ‘Awakening’ is also available on iTunes and Google Play.

I hope you find the book as interesting to read as I did writing it.

I am very excited to announce the launch of my book ‘Awakening’ which charts the rise of digital music and how it is changing the music industry. ‘Awakening’ is the definitive account of the music industry in the digital era. With exclusive interviews with the people who shaped today’s industry it tells the inside story of how the music business grappled with the emergence of an entirely new digital economy

The music industry is on the brink of an utterly transformative period of change that will result in the creation of an entirely new industry tailor made for the digital era. ‘Awakening’ presents the vision of how and why this change will come, what this future will look like and how the first steps on the journey are already being taken. The book includes interviews with 60 of the music industry’s leading figures, including globally successful artists and more than 20 CEOs (a full list of interviewees can be found at the bottom of the page). Alongside the insight from this unprecedented executive access, ‘Awakening’ uses exclusive consumer data, official market statistics, proprietary models and multiple additional data sources. In doing so it constructs an unparalleled picture of the new global music economy presented across 60 charts and figures.

All good stories start in the beginning. ‘Awakening’ deconstructs the failed state experience of the analogue era music industry with the definitive account of the music industry’s transition from booming $28 billion powerhouse to today’s much humbled $15 billion business. Music fans used to be told what to listen to when, where and how. In the new music industry the balance of power lies with the fans with themselves. The old music industry had the record labels at its centre, the new digital era industry will have the consumer at its core. The change will be generation defining and will transform forever what it means to be an artist and a fan. Livelihoods will be destroyed, others created, millionaires made, culture transformed. The change is already underway. ‘Awakening’ looks at each individual component of the music industry today and looks at each one is dealing with change and preparing for the future. From the superstar artist to the small independent label, from the pirate company CEO to the major label CEO, in the book I explore the incredibly varied picture of confusion and innovation, uncertainty and brilliance, fear and confidence. Most of all it is the story of a rebuilding, an Awakening of the new music industry.

The book has three sections:

I was extremely fortunate to interview many of the most important figures in the music industry of the last 15 years, including CEOs of major record labels, CEOs of all the major streaming services and platinum selling artists. I’ve managed to get the inside track on exactly what was happening behind the scenes.  I personally learned a huge amount while writing this book and I am confident virtually every reader will do so too.

In short, once you have read this book you will know practically everything that there is to know about the digital music market and where it is heading!

For anyone interested in the music industry and the lessons it provides for all media and technology businesses in the digital era, this is the only book you will ever need.

The book is available now on Amazon and iTunes and Google Play.

Also 10% of net profits will go to the music therapy charity the Nordoff Robins trust.

People interviewed for this book 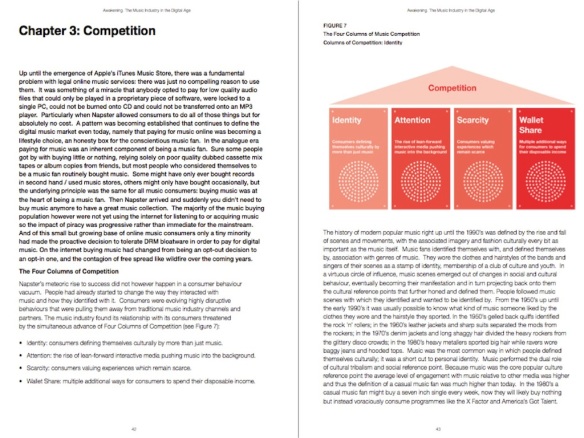