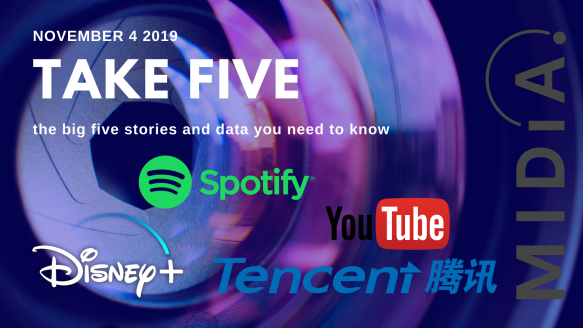 Disney tidies its streaming stats: Disney is tidying up its streaming subscriber numbers in preparation for reporting the performance so far of Disney+. In the shake-up, ESPN falls from 3.4 million to three million while Hulu goes from a 28.5 million to 29 million. All figures Q3 2019. Headline: Disney is already a streaming powerhouse and is about to become even bigger.

Spotify awards: Spotify is moving into the music awards space. The only surprise is that Spotify didn’t do this sooner; this is the equivalent of MTV moving into the awards space in the 2010s. Spotify will be hoping, probably with good reason, that it will be able to make its awards a bigger deal than YouTube has its YouTube Music Awards.

Tecent’s global gaming empire: Tencent has invested in 40% of Fortnite owner Epic Games and 11.5% in competitor PUBG. By using access to the Chinese market as leverage for getting equity stakes in western games publishers, Tencent is building a global games business. It may even be en route to becoming a global tech major. It has a long way to go, through.

YouTube creators can take a break, perhaps: YouTube CEO Susan Wojcicki claims her company’s analytics can take a break from making content and come back with bigger metrics. The data is likely skewed by a) under-performing channels taking a break, and b) the novelty factor of a returning creator. The underlying truth, however, is that YouTube’s monetisation system skews strongly towards high-volume output. The system needs changing if creators are to genuinely be able to take breaks.

Throw ladders down: Meghan Rapinoe’s acceptance speech for her Woman of the Year award presents a new vision for how those with influence should use their platform for others’ voices, by ‘throwing down ladders’ for others to climb up. She tackles inequality in many forms in her speech and sounds more like an accomplished activist politician than a sports personality. If only all sports people (and politicians) could make contributions like this. Go watch the video.

Apple ups its artist analytics but do artists care? Kobalt and Spotify both helped reshape the music industry’s understanding of what role data should play and how it should be presented. Apple announced its Apple Music for Artists (AMFA) is coming out of betawith a whole host of cool dashboards and analytics that dive down to city level. Powerful stuff indeed. The problem, though, is not data scarcity but data abundance. Overwhelmed by dashboards and tools, artists and their managers are becoming victims of data paralysis.

Streaming video endgame:Paradigm-shifting announcements don’t come along often and when they do it is not always obvious that they are so important. This is one of them: Disney announced it will bundle its forthcoming Disney+ with Hulu and ESPN+ all for just $12.99.For a tiny fraction of a cable subscription, Disney is giving the average family everything it needs from a TV package. The bundle simultaneously competes with Netflix and the traditional pay-TV companies Disney relies upon for carriage fees. This is go-big-or-go-home for Disney and is perhaps the biggest, boldest move yet in the streaming wars.

Star Wars – too much too soon: When Disney bought Lucasfilm for $4.1 billion in 2012 it was a statement of intent, particularly following the 2009 acquisition of Marvel. Marvel prospered with the almost TV-episode frequency of releases; the Star Wars franchise less so. With toy sales down, Galaxy’s Edge underattended, and disgruntled fansCEO Bob Iger cited ‘Star Wars fatigue’ and committed to slowing the release schedule. The temptation to saturate markets to compete in the attention economy can be hard to resist.

Pluto drives Viacom growth: Viacom’s ad-supported streaming service Pluto TV hit 18 million active users at the end of July, up from 12 million at the start of the year– with its connected TV user segment growing 400% year on year. Growth is so fast that 50% of ad inventory remains unsold. Nonetheless, coupled with Viacom’s Advanced Marketing Solutions (AMS) division US ad revenues returned to growth (6%) in the quarter while total Viacom revenues were up 6% also, to $3.35 billion. Maybe you can teach an old dog new tricks.

Sports bubble? What sports bubble? With pay-TV companies losing subscribers and overspending on drama to hold off Netflix, budgets for sports rights are going to feel the pressure. But in the English Premier League (EPL) the mantra is make hay while the sun shines. Total transfer spending before the pre-season deadline reached £1.41billion which was fractionally below the £1.43billion record set in 2017. More than half the clubs broke their individual player transfer records. The market will likely get even more heated when streaming players start increasing their spend, but if they get a market stranglehold they will do what they do best: ‘bring efficiencies into the supply chain’, which is west coast code for squeezing suppliers. Be careful what you wish for sports leagues.

Spotify just announced it is bundling in the Hulu No Commercials plan into its $4.99 student offering in the US. Given that the Hulu product retails at $7.99 and Spotify at $9.99, this is unmistakably a good value for money deal – even compared to the standard $4.99 student Spotify tariff. In the Spotify blog post announcing the tie up, it is made clear that this is the start of something bigger: “This is the first step the companies are taking to bundle their services together, with offerings targeted at the broader market to follow.”

Putting aside for a moment how the economics of this bundle might work for Spotify, this partnership gives us a clear pointer as to Spotify’s video strategy going forward. The other part of the puzzle is the news that Spotify is hiring former Maker Studios exec, Courtney Holt, to head up its original video and podcast strategy.

Spotify knows that it needs to have a video play of some kind, despite the failure of its previous attempt. Unfortunately, everyone else is thinking the same – with Snap Inc, Facebook and Apple now committing billions to original content, in an already inflated market for video. Hulu will spend $2.25 billion on original content in 2017, matching Amazon’s original content budget for the year. This is the barrier to entry for video, and its simply too high for Spotify to justify.

Instead, it has focused on working with one of the leading streaming video services in the US, and is building complimentary music-orientated video in house. Thus, through this Spotify bundle a user gets their scripted drama hit from Hulu and their music video hit from Spotify.

Spotify’s Hulu partnership is a smart way to get into the video market without getting in over its head. While for Hulu, Spotify gives it clear differentiation from Netflix and Amazon. Which is given extra significance by the announcement that T-Mobile Netflix for free for its premium customers. Whether the economics of this deal add up for either party is another question entirely.

Today at MIDiA Consulting we have released a new report on the digital content sector entitled ‘Making Freemium Add Up’.

The report combines an unprecedented appraisal of key freemium service metrics with market analysis and recommendations to create a definitive assessment of the freemium marketplace.  In the report we analyse an intentionally diverse selection of consumer web services, looking at the distribution and scale of their user bases and the relationship of these with their business models.  Services tracked range from music services like Slacker, through utility services like Skype to social services like Google+.  It also includes long term data trend analysis of Spotify, Deezer and Pandora.

The report is available for free to all subscribers to Music Industry Blog (to subscribe just add your email address in the Email Subscription box to the right of this post.  If you are already a subscriber but have not yet received a copy of the report by email please email mark AT midiaconsulting DOT COM).

Here are some of the key findings of the report: