In the four short years since Facebook passed 100 million global active users back in August 2008, social networking has gone mainstream and Facebook’s own active user base now numbers in excess of 955 million. Facebook had many predecessors (MySpace, Hyves, Friendster, Orkut to name but a few) but it achieved what none of them did: it created a service that mainstream consumers adopted in their droves.  Yet despite this success, and as Facebook nears the 1 billion user mark, there remains a niggling worry which stubbornly refuses to go away: has Facebook actually taken social networking mainstream or has it just taken Facebook mainstream? 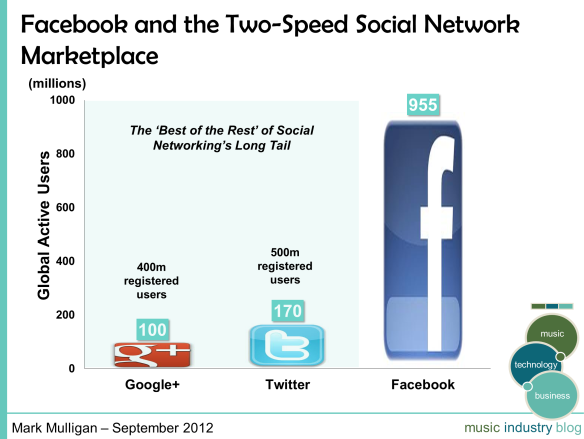 Facebook’ dominance of social networking is clear and its 955+ million user count stands head and shoulders above the rest (see figure).  Twitter is the closest challenger with less than a fifth of Facebook’s active user count, and Google+, despite bold early moves remains approximately a tenth of Facebook’s scale with 100 million active users.  Beyond those key players the social network long tail rapidly fragments into niche sites and also-rans.  What is becoming apparent is that a two-speed social network landscape is emerging with Facebook effectively a lap ahead of the best-of-the-rest.  In short, Facebook has won the race for the mainstream consumer.

The Importance of Network-Effect Scale

There are many reasons for Facebook’s success, but being all things to all people is centre stage, and in the mass-market scale game there is currently only space for one winner, with success intimately tied to ubiquity.  Facebook has the benefit of a crucially important asset: network -effect- scale. Because the majority of people’s contacts are on Facebook it is the network they opt into, thus increasing the number of other people’s contacts, and so on in a continual virtuous circle.  And as mainstream consumers don’t want the hassle of maintaining multiple social networks, a winner-takes-all scenario emerges.

Twitter and LinkedIn owe their success to not competing with Facebook for the mass market consumer: they deliver value to their users as a complement to Facebook rather than as an alternative (at least in most cases).  Long term success for generalist social networks such as Google+ though depends explicitly on taking users and user hours away from Facebook.  The challenge for Google+ is that those entrenched mainstream Facebook users are not going to be wowed by features or functionality.  If they will ever shift from Facebook it will be because of the same reason they went there in the first place: they will go where their friends and family are.

Thus the network-effect acts as velvet handcuffs for mainstream Facebook fans.  What Google+ is banking on is that enough of the more sophisticated users get swayed by features and functionality, in turn starting the crank wheel of the network effect.  Which is exactly why Facebook is so actively integrating content partners such as Spotify into its platform: the more content experiences Facebook can funnel through its platform, the more reason there is for sophisticated users to remain loyal.  If friends and family are the velvet handcuffs for the mainstream user, then content plays the same role for the sophisticated user. (For more on Facebook’s Socially Integrated Web Strategy see this free Music Industry Blog report).

As things stand, when Facebook does hit 1 billion users it will say more about its own success than it will about the overall health of the social network landscape.  The catalyst for Facebook’s network-effect was the foundational principle of connecting people, and the human need to connect is the behavioural glue that ties Facebook together.  Mainstream consumer inertia is the most powerful force in the social network marketplace today, not innovation. This is not to say that social networking will remain defined by a mass market monopoly in perpetuity, but it will until (or if) mainstream consumers acquire the tolerance – or need – for more than one social network.  Until then, social networking will remain a two-speed marketplace.

I will be building upon these ideas and others in a forthcoming Giga Om Pro report ‘Facebook and the Two Speed Evolution of Social Networking’ Watch this space for more details.