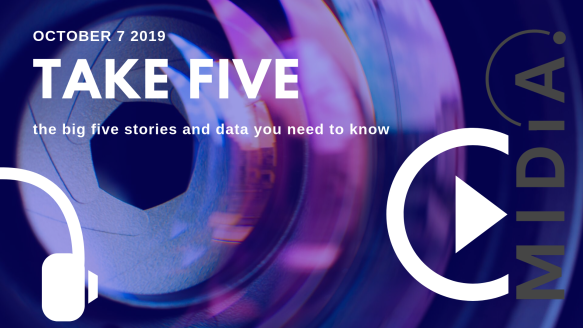 Streaming pricing, emerging questions: Music Business Worldwide raised the question of why streaming is discounted in emerging markets when BMWs and Amazon Echoes are not. There are many layers to this, but the key one is – who is going to pay? High income urban elites can afford Western prices; the mass populous cannot. BMW is targeting thousands, not tens of millions, in India.

Streaming wars heat up: Video streaming competition is unlike music, with big studios launching their own services and thus competing with distribution partners. Disney’s decision to ban Netflix ads hints at just how messy the video streaming wars are going to get.

Air Jordan meets AI meets social commerce: Snapchat, Shopify, Nike and Darkstore teamed up to create an AI/social commerce push for the new Air Jordans. While this is clearly a tightly controlled marketing push, it nonetheless hints at how digital tech mash-ups can push boundaries.

The Yogababble index:As we approach peak tech, the semi-mystical power of inflated company mission statements is beginning to lose its lustre. Scott Galloway has created his Yogababble index to illustrate the contribution of overzealous comms in peak tech.

The Fall 2019 TV shows to look out for: TV’s biggest ad buyers give their take on which new shows they think will fly. Winners: Mixed-ish, The Unicorn, Prodigal Son. Losers: Carol’s Second Act, Sunnyside.

In last week’s Take Five I highlighted a Vox story which reported that over the last year the number of companies using terms like ‘tech’ or technology’ in their documents is down 12%. This is an early indicator of a much more fundamental concept – we may have already reached peak in the tech sector, the business sector that has driven the fourth industrial revolution. While some may quibble whether the internet-era transformation was the predecessor to a new industrial revolution built around AI, big data and automation, the underlying factor is that tech – for better or for worse – has shaped the modern world. More in the developed world than the majority world perhaps, but it has shaped it nonetheless. Now, however, with tech so deeply ingrained in our lives and the services and enterprises that facilitate them, has tech become so ubiquitous as to render it meaningless as a way of defining business?

Tech is the modern world

When Tim Berners Lee invented the World Wide Web in 1989 he could have had little inkling of the successive wave of global tech superpowers that it would incubate. As we near the end of the second decade of the 21stcentury it is hard to imagine daily life without it. The pervasive reach of the web and the Internet more broadly is perfectly illustrated by Amazon’s recent launch of twelve new devices, including a connected oven, a smart ring (yes a ring) with two mics and a connected night light for kids. All of which follows Facebook’s connected screen Portal, which for a company that trades on user data, raises the question: ‘Is this your portal to the world, or Facebook’s portal to your world?’ However, regardless of why the world’s biggest tech companies want us to put their hardware into our homes, this is simply the latest new frontier for consumer tech. Now that we carry powerful personal computers with us everywhere we go, we remain instantly connected to our personal collections of connected apps and services. Tech is the modern world.

With tech now powering so much of what we do, it raises the question whether tech is any longer that useful a term for actually distinguishing or delineating anything. If everything is tech, then what is tech? It is a question that the world’s biggest investors are starting to ask themselves, too. In fact, we have now reached a stage where a) tech is a meaningless concept – everything is tech, and b) there is the realisation that many companies are ‘tech washing’, using the term ‘tech’ to hide the fact that they are in fact anything but tech companies which happen to use technology platforms to manage their operations. In the era when everything is tech enabled, you would be hard pushed to bring a new business to market that does nothave tech at its core. Companies like Uber, WeWork and just-listedPeleton have managed to raise money against billion-dollar-plus valuations in large part because they have positioned themselves as tech companies. In actual fact when the tech veneer is removed, they are respectively a logistics company, a commercial rental business and an exercise equipment company. If they had come to market simply with those tag lines, they would undoubtedly have secured far smaller valuations and many of their tech-focused investors would not have backed them. Investors are beginning to see through the ‘tech-washing’, as evidenced by the instant fall in Peleton’s stock price, WeWork’s crisis mode sell-off and Uber’s continuing struggles.

Calling yourself a tech company has become a get out of jail free card for new companies, an ability to raise funds at inflated valuations, and a means to persuade investors to focus on ‘the story’ and downplay costs and profit in favour of growth, innovation and of course, that hallowed tech company term: disruption. I have been a media and tech analyst since the latter days of the original dot-com boom, and the mantra of the companies of that era was that ‘old world metrics’ such as profitability didn’t apply to them. Of course, as soon as the investment dried up, the ‘old world metrics’ killed most of them off. Today’s ready access to capital, enabled in part by low interest rates, has enabled a whole new generation of companies to spin the same yarn. But whether it is the onset of a global recession or growing investor scepticism, a similar fate will likely face today’s crop of ‘disruptors’. The dot-com crash separated the wheat from the chaff, wiping out the likes of Pets.com but seeing companies like eBay and Amazon survive to thrive.It also took a bunch of promising companies with it too. The imperative now is to strip away pseudo-tech companies from the tech sector so that investors can better segment the market and know who they should really be backing through what will likely be a tumultuous economic cycle. As SoftBank is finding to its cost, building a portfolio around pseudo-tech becomes high risk when the tech-veneer can no longer hide the structural challenges that the underlying businesses face.

Tech is central to the modern global economy and will only increase in importance – at least until the world starts building a post-climate-crisis economy. It is imperative for genuine tech companies and investors alike to start taking a more critical view of what actually constitutes tech. The alternative is that the tech sector will get dragged down by the failings of logistics companies and gym equipment manufacturers.

Spotify – small step, big step: Spotify has announced that it is acquiring musician marketplace company Soundbetter. Back in July, Spotify halted its artist direct offering. Some quarters viewed that as the end of Spotify’s disruptive label-competitor strategy. We thought differently, and this acquisition confirms it. Being a next-gen label means being so much more than what labels used to do. Spotify is building it from the ground up, starting with artist collaboration.

Apple, half-bundle: While launching new hardware, Apple announced it will be bundling a year of Apple TV+ with new device sales.This feels like it is more about Apple not feeling that it has enough value to expect standalone subscribers yet, and that it expects to be in a stronger place 12-18 months from now. Nevertheless, Apple’s future is bundling. Two to three years from now, expect an all-in-one bundle of everything Apple has to offer, fully integrated into its devices. That’s how to drive up device average revenue per user (ARPU) in a saturated market with slowing replacement cycles.

Apple, SKU skew: Lots of announcements from Apple – including Arcade. The very fact that there were so many (e.g. three iPhones) points to one of Apple’s most important post-Jobs transformations: fragmentation. In the 2000s Apple had a far more concise product line-up than its traditional Consumer Electronic (CE) competitors. Now it has dozens of products and services and looks every bit the traditional CE company. Gone are the days of the simplicity of one iPhone, replaced by a suite of segmented, highly-targeted product SKUs (Stock Keeping Units). Clarity of single purpose is a luxury no longer afforded.

Peak tech, sort of: The title of Vox’s peak tech piece turned out to be much more promising than the piece itself(which focuses on what terms companies are using to describe themselves). But there is a bigger story here: we have now reached a stage where a) tech is a meaningless concept – everything is tech, and b) there is the realisation that companies that use tech to maintain networks of services and customers (Uber, WeWork etc.) are highly vulnerable with little in the way of actual assets. If the tech bubble bursts, investors will need somewhere else to put their money.

Space lift – yes, space lift: Years ago, sci-fi author Arthur C Clarke wrote of a tower that would act as an elevator for spacecraft to launch directly from the edge of the Earth’s atmosphere, thus saving the huge thrust energy required to leave the earth’s orbit. It turns out that no known materials would support such a vast structure. Now two astronomers have proposed an alternative – a 225,00 mile long,pencil-thin, zip wire hanging down from the surface of the moon…you couldn’t make it up.