MIDiA and Music Business Worldwide have been tracking record label and publisher financial releases throughout 2016. In addition MIDIA has conducted market sizing work on the publishing sector and research for the Worldwide Independent Network’s (WIN) indie label market share project. Pulling all of these inputs together, along with reports from country trade bodies and PROs, MIDiA has created a recorded music market share model to provide a unique view of where the revenue flows in the global business. To ensure as representative a picture as possible all local currency data has been converted into US dollars at the currency conversion rates for the respective quarters. This removes the distortion effect that occurs when data historical data is retrospectively converted at today’s conversion rates. 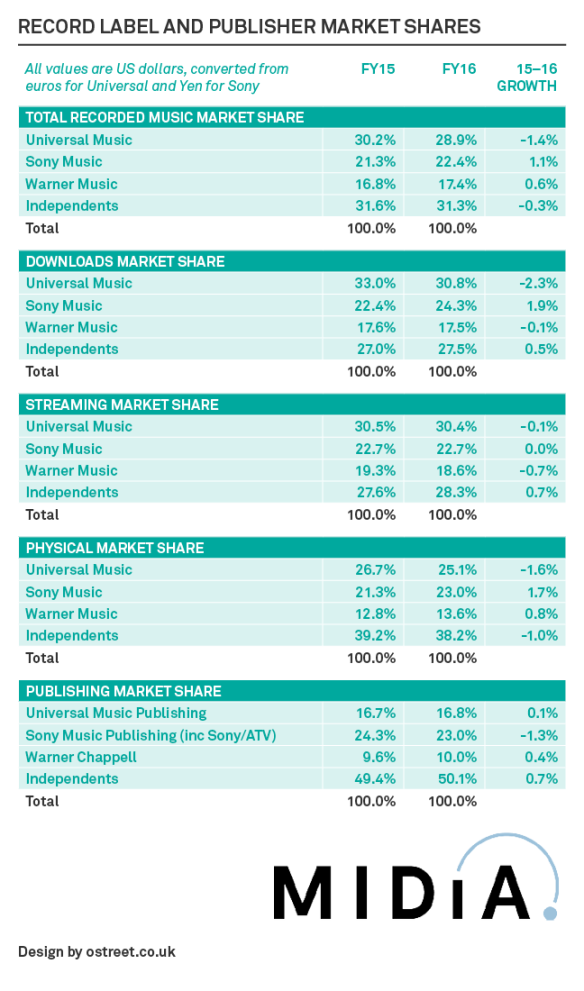 (MIDiA Research subscription clients can access the full 15 page excel spreadsheet with all of the underpinning data right now by clicking here.)

The Recorded Music Market In 2016

2016 was a big year for the global recorded music business, with record labels and publishers reporting growth almost across the board. Unsurprisingly, streaming was the driver of growth, increasing its share of label revenue from 23% in 2015 to 34% in 2016. However, the experience was far from uniform across the various corporate groups:

(MIDiA Research subscription clients can access the full 15 page excel spreadsheet with all of the underpinning data right now by clicking here.)

Complexity and opacity continue to act as brakes on the digital music market. For all the progress of companies like PledgeMusic and Kobalt, this emerging ‘alternative’ music industry is still very much at a formative stage. Some years from now this generation of companies could underpin the emergence of a counter-industry, an interconnected mesh of disruptive rights and tech companies that give artists and songwriters different routes to market and greater transparency and accountability. Heck, it might even have Blockchain underpinning it. But before this counter-industry movement gets to scale, it could have the wind stolen out of its sails by none other than YouTube.

Although YouTube has never had the closest of relationships with the music industry, it has clearly found the last few months particularly challenging, portrayed as pretty much everything that is wrong with the digital music market. While there is no doubt that YouTube’s revenue-to-audience ratio is below that of audio streaming peers, it is also clear that YouTube is the music app of choice for more consumers than any other service (and it’s growing faster too). YouTube is both a crucially important part of the digital music market and a disruptive partner.

Parent company Google has long had an at-best ambivalent attitude to copyright (in stark contrast to its staunch support for patents) and the record labels’ current crusade to have safe harbour legislation revised belies an industry perception that YouTube is sailing as close to the wind as it can get. That may well be the case, and there is no doubt that Safe Harbour was not designed to underpin the business model of a global tech titan. Yet it is also clear that a whole generation of non-music YouTubers have worked out how to build vibrant careers on the platform. So YouTube’s potential is only partially tapped for music.

Regular readers will know that I have explored at length what makes YouTube’s native creators succeed in ways that music artists do not. But I think we may now be on the verge of YouTube flicking the switch on an entirely new platform for artists, to help them get as much out of YouTube as the likes of PewDiePie and SMOSH. This could be nothing short of an entirely new music industry, one that sits outside of the constraints and structures of today’s business.

Here’s how and why…

Back in 2011 Google bought royalty reporting company RightsFlow to help it identify rights holders on YouTube. RightsFlow’s team and technology were widely recognized as best-in-class and Google paid handsomely, swiftly integrating the team into the YouTube organization. My theory is that this was one of the first steps in a much bigger journey. Since then, Google has invested in next gen publisher Kobalt and next gen label 300 Entertainment. It was even reported to have looked at buying the Jackson Estate’s 50% share of Sony/ATV. Most recently YouTube announced its implementation of the DDEX Digital Sales Report Flat File Standard (DSRF), an open source digital supply chain standard aimed at faster, more accurate royalty reporting and distribution. Each component in isolation paints one picture, but put them together and you have the makings of the foundations for a full service music company. What I think could happen is for YouTube to turn its platform into a self contained music business, taking care of everything from rights through creation to monetization. Here’s how the components could stack up:

An Alternative Industry, Not Simply A New Element

To be clear, all of this would be intended as an alternative to the traditional label / publisher / PRO model. For artists that sign up, every single right would be assigned to, and flow through the YouTube system so that there would be no remit for PROs, labels or publishers. Of course it would only work really well for a specific type of artists e.g. singer songwriters but YouTube would iterate the model over time to give it broader appeal.

The earliest iterations would probably be pragmatic compromises. For example, many YouTuber musicians rely on doing cover versions to drive traffic so Google would still need to work closely with music publishers. In fact, around 14% of plays of the most popular music videos on YouTube are cover versions or parodies. (Which helps put the Sony/ATV rumour into context.) Over time though, YouTube would make its music infrastructure as self contained as possible. And over time, as it acquires a bigger body of artists that have had no previous label or publisher deal, progressively more of its music catalogue would become YouTube only. Think of it like resetting the clock to zero.

I doubt YouTube’s aspirations are solely limited to its platform. The strategic investments in next gen music companies and its DDEX work could form tendrils stretching out into the broader industry, extending YouTube’s reach and influence. They days of YouTube simply as a place to promote your latest song are long gone. What we have now is a powerful, global platform that wants to make music work, with or without traditional rights holders. Google’s approach to business has always been about bringing, scale, effectiveness and efficiency to supply chains. Music is no different, but the embedded nature of the traditional companies has meant that YouTube has only been able to partially deliver on that basis. That could well be all about to change.