Music Industry Blog periodically publishes reports on key digital music trends and issues.  These reports are free of charge and are sent directly to anyone who is an email subscriber to Music Industry Blog (you can subscribe by simply submitting your email address in the ‘Email Subscription’ box to the right of the home page).

Making Freemium Add Up: An Assessment of Content Monetization

The paid content market is finally getting going but it has been a long time in the making. When web business slowly pieced together the remnants of the post- dotcom bubble Internet economy, attention naturally shifted business models that were not dependent upon advertising. But Internet users were not ready to cold turkey from free content and most paid content sectors stuttered in the 2000’s. Apple’s iTunes Store was the key exception and because it drove approximately three quarters of digital music sales, music came to be viewed as the canary in the mine for paid content more generally. It is a rule that is still common intellectual currency, but it is time for a reassessment of music’s role in the paid content marketplace. Not just because Apple’s unique iTunes ecosystem is not representative of the broader Internet, but also because of the growing success of paid content’s third way: freemium.

The Curious Case of the South Korean Music Market

Psy’s ‘Gangnam Style’ might have catapulted the South Korean music market into the global consciousness but to industry observers like myself it has long been a market of particular interest. Being the first major music market to pass the 50% digital mark – in 2006 – South Korea has been held up both as a digital trailblazer and as a canary in the mine for the global music industry. Strong growth over recent years hinted at a brighter international future, but just as ‘Gangnam Style’ was propelling South Korean music to unprecedented global heights the South Korea music market went back into decline.

The South Korean music market is one of contradictions and idiosyncrasies, but crucially it also holds many lessons that the global music market would do well to pay heed to.

Streaming music services have brought some much needed momentum to the global digital music market, just when it was needed.  But the success has come with price of controversy a 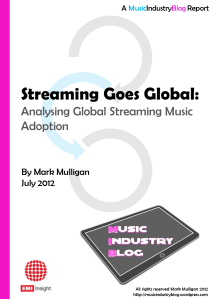 nd heated debate across the value chain about just what effect streaming services have on the broader music marketplace.

Now, using EMI’s 850,000 interview consumer dataset, we can assess just what impact streaming is having across the globe.

The Music Format Bill of Rights

The music industry is in dire need of a genuine successor to the CD, and the download is not it. The current debates over access versus ownership and of streaming services hurting download sales ring true because a stream is a decent like-for-like replacement for a download.  The premium product needs to be much more than a mere download.  It needs dramatically reinventing for the digital age, built around four fundamental and inalienable principles of being Dynamic, Interactive, Social and Curated (D.I.S.C.).

This is nothing less than an entire new music format that will enable the next generation of music products.  Products that will be radically different from their predecessors and that will crucially be artist-specific, not store or service specific.  Rights owners will have to overcome some major licensing and commercial issues, but the stakes are high enough to warrant the effort.  At risk is the entire future of premium music products.

Digital and social tools have already transformed the artist-fan relationship, but even greater change is coming.  In the anaologue-era music was mass produced, releases cycles were static and music product formats were a creative dead-end.  Mash-ups, engaged online fans and user generated content brought these barriers tumbling down.  The scene is set for the Mass Customization of music, heralding in the era of Agile Music.

Most fans of established artists don’t even go to their gigs.  Similarly most don’t regularly visit their various social channels, and even of those who do, most don’t actively participate, preferring to observe from afar.  Put simply, the majority of mass market music consumers are relatively passive, so to have widest possible potential Fan-Fuelled Creativity must also have something to offer for the passive majority.  Welcome to the Three Cs of Fan Fuelled Creativity. 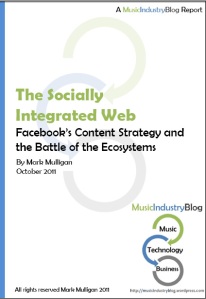 Change is afoot in the Internet.  Facebook’s new Socially Integrated Web strategy is set to make Facebook one of the most important conduits on the web.  Facebook is pushing itself further out into content experiences in the outside web while simultaneously pulling more of them into Facebook itself.

The Timeline announcements at f8 saw Facebook establishing itself as a universal content dashboard – a 21st century cable company for the Internet – establishing its own content ecosystem to compete with the likes of Apple and Amazon. While traditional ecosystems are defined by hardware and paid services, Facebook’s is defined by data and user experience.

The Socially Integrated Web is the strategic architecture of Facebook’s digital content strategy.  It is a strategy that others’ are following too but that Facebook is currently doing best.  Facebook has been quietly putting many of the building blocks of the Socially Integrated Web into place over the last year or so, but the most dramatic moves were announced at Facebook’s f8 conference in September.  It was there that we heard about Facebook’s controversial Timeline feature.  This – along other functions such as Likes on websites across the web – are Facebook’s attempts to join the dots in our increasingly fragmented and cluttered digital lives.