Apple’s entry into the subscription market later this year will fire a broadside across the freemium model.  But there are not many companies that can do what Apple can.  Every product and service needs to acquire customers and usually that entails advertising and marketing.  If what you are selling is a relatively nuanced proposition, and music subscriptions are exactly that, then you are going to need to spend a lot of time and money building the awareness and understanding of the product.  That typically either means a big ad budget or having a captive audience to talk to directly without the marketing middleman. For freemium services that is the free tier.  For Apple that is the installed base of device owners.  It is all well and good for Apple to crusade against free in its entirety because that also happens to make it increasingly difficult for anyone else to make the subscription model work.  As I argued in my previous post there is a need for a rethink of free, to ensure that it acts as an acquisition funnel for subscriptions not as a replacement for them.  But there is another part of the puzzle that needs solving too: the subscription model itself. If freemium is on borrowed time, a solution is needed that the entire market can work with, not just Apple.  Pay As You Go (PAYG) is part of the answer.

Currently the music industry is trying to migrate all of its paying customers to subscriptions.  The theory is that this should increase the Average Spend Per User (ARPU) to 9.99 but as MIDiA’s research revealed, thus far it appears to be doing a better job of reducing the ARPU of the most valuable. Thus we have a worst of both worlds scenario in which the ARPU of the most valuable customers is capped (something no other media industry does) and the lower value customers aren’t offered enough options to get on the spending ladder.

When I wrote back in October that it was time for a pricing reset I pointed to three things that need to happen:

The good news is that we’re beginning to see some movement on all three counts, including Apple poised to tick off the second item later this year when it launches its subscription offering.

The Return Of The Day Pass

Last week Pandora announced that it was introducing a $0.99 day pass to its ad free subscription offering.  The idea isn’t new, Spotify had a day pass in its earlier days, but the timing is now right for a reassessment of the tactic.   Most people are not in the habit of paying for music on a monthly basis and most do not spend anything close to 9.99 a month.  Little surprise then that only 10% of consumers are interested in a 9.99 subscription.  But PAYG pricing interest, while still relatively modest, is the clearly the pricing that has strongest appeal (see figure).  PAYG pricing allows consumers to ‘suck it and see’ to try out.  It is what the mobile phone business needed to kick start cellular subscriptions and it is what the music industry needs too.  And done right PAYG can even uncap ARPU by allowing customers to spend more than they would on a monthly plan, something that happens frequently among pre-pay mobile phone customers. 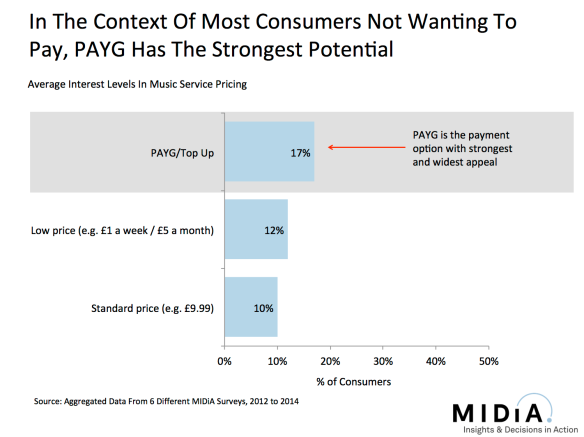 Currently there is only a handful of companies pioneering this approach, including the MusicQubed powered MTV Trax’s ‘Play As You Go’ model and Psonar’s ‘Pay Per Play’ offering.  It should only be a matter of time before the big streaming services start experimenting with a la carte pricing but they will have to tread carefully to ensure they do not cannibalize the spending of their 9.99 customers.  At an industry level though the case is clear and it is one that other media industries are already heeding.  In the TV industry services like Netflix are empowering cable and satellite TV subscribers to cancel or reduce their subscriptions.  Consequently TV companies are busy experimenting with unbundling their subscription offerings to meet the needs of their newly empowered customers.  The most interesting example for the music industry is Sky’s Now TV in the UK which offers its core programming with no monthly contract and enables users to simply add on extra content such as and ‘entertainment pass’ or a ‘sports pass’ as one off payments.

The future of music consumption is clearly going to be on demand but 9.99 subscriptions are just one part of the mix. PAYG pricing will be crucial to ensuring that streaming can break out of its early adopter beachhead.