Music revenues declined by 2.9% in 2014, down from $6.9 billion in 2013 to $6.7 billion across the US, UK, France, Italy, Australian, Sweden and Norway. Much has been made of the fact that revenue fell in the Nordic markets where streaming had previously driven growth. One year’s worth of revenue numbers does not make an industry trend. The one year fall off in strong streaming markets is not proof of a fundamental weakness in the streaming model in just the same way a couple of years of growth was not proof of its strength. We are in the midst of a transition period and there will be further anomalies and blips along the way. They key reason for the volatility is the music industry’s growing dependence on an increasingly small group of consumers: the Music Aficionados. Music Aficionados are consumers that spend above average time and money with music. They represent just 17% of all consumers but a whopping 61% of all recorded music spending. These consumers shape the fortunes of the music business. In the past this did not matter so much because: 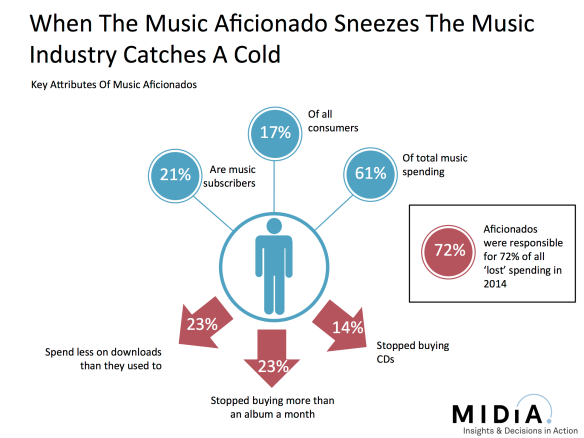 If we extrapolate those percentages to Aficionados’ share of spending in those markets in 2014 we see:

In total the Aficionados accounted for 76% of the lost CD and download revenue in 2014. So what’s going on? Why are the super fans jumping ship? Well first of all, they aren’t. This is a transition process. They are shifting their spending towards subscriptions. For some of them this will mean spending less (especially the 23% that stopped buying more than an album a month and are now spending $9.99 instead of $20 or $30). For others it will be an increase in spending. At a macro level though, lost download and CD spending accounted for a $617 million decline while streaming growth accounted for a $351 million gain, which means that there was a net loss of $265 million. Because the music industry has largely stabilized after years of dramatic decline, it only takes relatively minor fluctuations one way or the other to determine whether a market grows or shrinks. This is why both the Aficionado needs more attention now than ever and also why the Passive Massive needs engaging at scale. Aficionados have been taken for granted for too long and are now being migrated away from products without a spend ceiling (albums) to a product with a fixed ARPU cap (9.99 subscriptions). When the Aficionados sneeze the music industry gets a cold. It is time for a cure.