As most people expected, the UK recorded music industry returned to growth in 2015. The UK now follows an increasingly familiar European narrative of strong streaming growth helping bring total markets back to growth. Sales revenue increased 3.5% to reach £1.1 billion while total streams increased by 85% to reach 53.7 billion, with audio stream representing 49.9% of that total. There is no doubt that these are welcome figures for the UK music industry but as is always the case, a little digging beneath the surface of the numbers reveals a more complex and nuanced story. Here are the three things you need to know about UK music sales in 2015.

Long term readers will know that I’ve long argued the ‘Replacement Theory’, that streaming growth directly reduces download sales. It is a simple and inevitable artefact of the transition process. Indeed a quarter of subscribers state they used to but no longer buy more than one album a month since they started paying for streaming. There have been plenty of opponents to this argument, normally from parties with vested interests. But the market data is now becoming unequivocal. While streams increased by 257% between 2013 and 2015 download sales decreased by 23%. And of course the vast majority of that streaming volume came from free streams, not paid.

The download to streaming transition is an inevitability, whatever business models are wrapped around it. It is part of the fundamental shift from ownership to access of which streaming music is but single component. It comprises consumers progressively replacing one behaviour with another. In fact, the evolution is so deliberate and predictable that it manifests in a clear numerical relationship: the Transition Triangle.

The UK music industry trade body the BPI has created a number of additional classifications for music sales and consumption. These include Stream Equivalent Albums (1,000 streams = 1 album) and Track Equivalent Sales (10 track sales = 1 album). Using these classifications and adding in actual album download sales we see a very clear relationship between the growth of streaming and the decline of downloads. The difference in volumes between downloads and streams each year is almost exactly the same as the amount by which downloads decreased the previous year. At this point even the most ardent replacement theory sceptic might start suspecting there’s at least some degree of causality at play.

3 – Thanks Are Due To Adele, Again

Back when Adele’s ‘21’ was setting sales records, music markets across the globe owed her a debt of gratitude for helping slow the incessant decline in sales. Global revenue decline fell to less than 1% and US revenue actually grew by 2.9% (falling back down the following year). Now she’s done it again with ’25’, giving album sales enough of a boost to ensure that the growth in streaming revenue lifted the entire market. For although album sales actually declined in 2015 and streaming volumes had grown more strongly in 2014, it was the combined impact of slowed album decline and streaming growth in 2015 that enabled the total market to grow so strongly.

Adele generated around £25 million of retail sales revenue in 2015, which was equivalent to 70% of the £36 million by which UK music sales revenue increased that year. While of course a portion of that £25 million would have been spent on other repertoire if ‘25’ had not been released, the majority would not. With ‘21’ and now with ‘25’ Adele has been able to pull casual music consumers out of the woodwork and persuade them to buy one of the only albums they’ll buy all year, often the only one.

Without that £25 million UK music sales would have increased by just 1%.  So in effect streaming services have Adele to thank for ensuring their growth lifted the whole market even though she famously held ‘25’ back from each and every one of them. Sweet irony indeed. 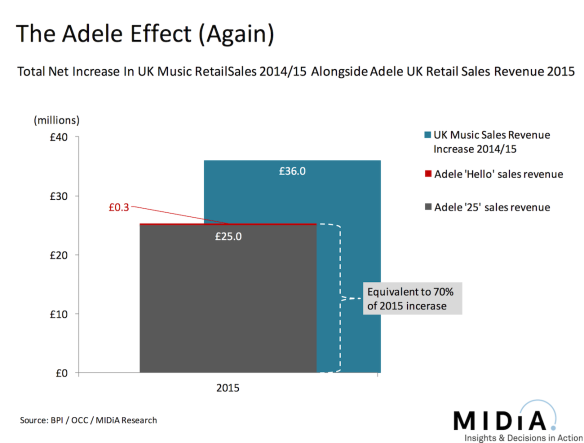 As a final postscript, the role of YouTube, while underplayed in the official figures, is crucial. While audio streams grew by an impressive 81% in 2015, video streams grew by 88%. So however good a job the streaming services might be doing of growing their market, YouTube is doing an even better one.