The importance of Apple to the digital music market cannot be overstated.  Without Apple the digital market would be vastly smaller than it is now.  With all of the talk of streaming services and the shift to the consumption era it is easy to think of Apple’s iTunes Store as yesterday’s game.  Such an assumption is as dangerous as looking upon the CD as an irrelevance in the present era.  The CD and iTunes combined account for approximately 78% of total recorded music revenue in the world’s 10 largest music markets.   And yet neither look like they are going to provide the momentum the music industry needs over the next few years.  Despite its vast importance to music revenue today, the CD is obviously on a fixed downward path.  And the download is not so dramatically different in profile in that it is the dominate revenue source yet is not delivering the dynamic growth the digital market needs.  Key to this is of course the role of Apple.

Apple CEO Tim Cook told us at the launch of the iPhone 5 that ‘Apple still loves music’ and so it does.  But music is inherently less central to Apple’s content and device strategy than it was 5 years ago.  When the iPod launched it had a monochrome screen and did little else than play audio.  Music was the killer app with which to market iPods.  Now games, apps, video and books show off the capabilities of colour touch screen iPads and iPhones much better than a static audio file (even if music remains one of the key activities on both those devices).    In the early days of the iPod Apple needed the record labels more than they did Apple.  Indeed, to begin with the iPod was far from a runaway success.  By the end of 2002, one year after launch, the iPod had only sold 625,000 units.  The iTunes Music Store changed the story, delivering not only unprecedented digital music milestones, but also record iPod sales. After the first full year of the iTunes Music Store, sales of the iPod had quintupled from 2 million to 10 million, and one year later they surpassed 40 million. The iPod and the iTunes Music Store had a clear symbiotic relationship.  Now though, Apple’s devices benefit from a much broader array of content and services from the iTunes Store, which pointedly is no longer called the iTunes MUSIC Store.

Apple’s diversification of device and content strategy heralded a brave new chapter in Apple’s history but it has also left the digital music market without the fiercely energized catalyst that kicked it into motion.  By the time Apple launched the iPhone in 2007, the installed base of iPods was already slowing.  Though sales were still increasing, the majority of those were either replacement or additional purchases.  So although iPod sales were booming still, the number of new iTunes Music Store customers was not.  Throughout 2008 I presented the data to a number of senior record label executives at the time and I argued that they needed to start planning for a post-iPod slow down.  Some of them didn’t take me too seriously, and who could blame them, after all iPod sales were growing strongly and iTunes downloads were growing at a stellar rate. But now, with a few years of market data behind us, the true scale of the post-iPod slowdown is clear (see figure).  As soon as iPod sales slowed, so did the digital music market.  Prior to 2008 the digital music market had grown by an average annual rate of 85.2%, after 2008 that rate dropped to 7.5%.  In many markets the 2009 slowdown was of falling-off-a-cliff proportions: in the US digital growth slipped from 30% in 2008 to a near flat-lining 1% in 2009. 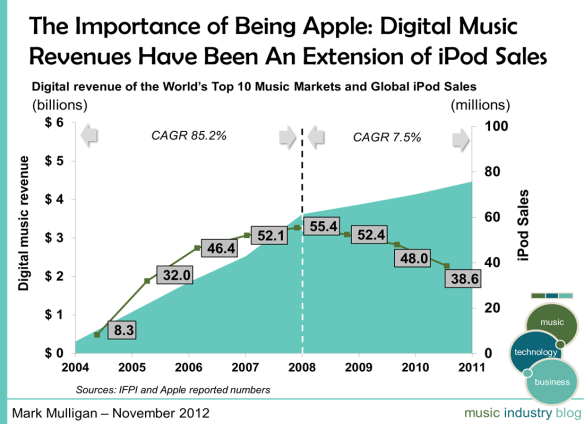 Streaming services have started to bring some welcome momentum to digital music.  But much more is needed from them if growth is to be reinvigorated.  That growth may also be helped by new music formats like the forthcoming Lady Gaga album app.  Whatever the source of it, it is clear that the music needs another iPod momentum to kick the digital market back into life.

19 thoughts on “Why the Music Industry Needs Another iPod Moment”