As 2013 music sales figures come in, the picture of streaming growing while download sales slow is coming sharply into focus. It is one of a clear phase  of transition/cannibalization (delete as appropriate depending on your point of view) taking place because the majority of paying music subscribers were already download buyers.  But that is not the whole picture.  There is an even fiercer form of competition for spend that, as far as the music industry is concerned, is inarguably driving cannibalization.

The iTunes Store accounts for the majority of the global music download market and has done so since its inception eleven years ago.  Back when it launched, the iTunes Music Store helped transform the iPod from a modestly performing device into a global hit.  Music was the killer app, music was what Apple used to sell the device and music is what iTunes customers spent all of their money on.  But all of that changed.  As Apple’s devices have done progressively more, Apple has introduced new content types into its store that better show off the capabilities of its devices.  When Apple launches a new iPad it doesn’t have a label exec holding up the new device playing a song with static artwork displayed…that simply would not showcase the device’s capabilities.  Instead an EA Games exec gets up on stage with a new game that fully leverages the capabilities of the iPad’s graphics accelerator, the accelerometer, the multi touch screen etc.

Music may still be the single most popular entertainment activity conducted on iDevices but it is no longer the app that fully harnesses the devices’ capabilities.  In fact because music products and services remain stuck in the rut of delivering static audio files – YouTube notably excepted – it is increasingly failing to compete at the top table in terms of connected device experiences.  Crucially, this is not just a behavioral trend, it is directly impacting spending too (see figure). 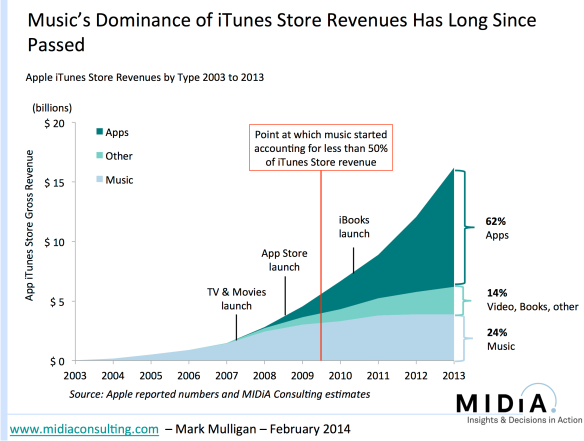 Back in 2003 music accounted for 100% of iTunes Store revenue because that was all that was available.  Over the years Apple introduced countless new content types, each of which progressively competed for the iTunes buyer’s wallet share.  The step change though occurred in 2008 with the launch of the App Store.  The impact was instant and by mid 2009 music already accounted for less than 50% of iTunes revenue.   By the end of 2003 the transformation was complete with Apps accounting for 62% of spending and music less than a quarter.  Quite a fall from grace for what was once the undisputed king of the iTunes castle.

Now it is clear that the app economy is a bubble that is likely to undergo some form of recalibration process soon (80%+ of revenues are in app, 90%+ of those are games, and the lion’s share of those revenues are concentrated in a handful of companies) but the damage has already been done to music spending.

If music industry concerns about download cannibalization should be addressed anywhere it is first and foremost at apps.  At least with streaming services consumer spending remains within music rather than seeping out to games.  Though the bulk of the app revenue is ‘found’ incremental revenue, apps are additionally competing for the share of the iTunes’ customers wallet i.e. growth is coming both from green field spend and at the expense of other content types.

So what can the music industry do?  It would be as foolish as it would be futile to try to hold back the tide. Instead, music product strategy needs to do more to embrace the app economy.  That means, among other things:

Though we are nowhere close to talking about the death of music downloads, apps have turned the tide for music spending.  The music industry can either sit back and feel sorry for itself, or seize the app opportunity by the scruff of the neck.