One of the many things that the digital revolution has done to the music industry is to create and accentuate a number of imbalances. Imbalances that will either change, become the foundations of the next era of the music business, or both. In fact there are three key areas where, coincidentally, the lesser party is 6 times smaller than the other: 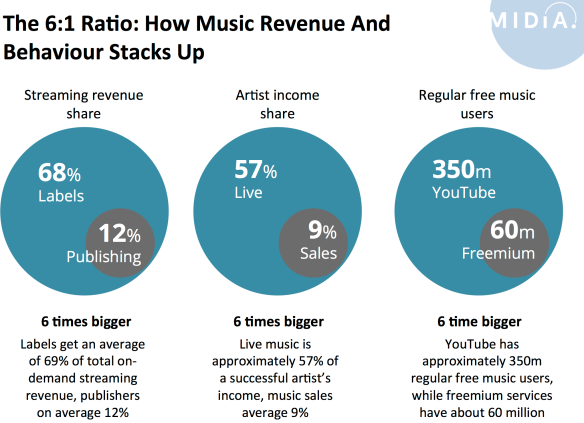 The music industry has never been a meritocracy nor will it ever be one. So it would be fatuous to suggest equality is suddenly going to break out. However there will be something of a righting process in some areas, especially in the digital music revenue share equation. Most significantly though, these ratios are becoming the foundational dynamics of the new music industry. These are the reference points that artists, rights holders, and all other music industry stakeholders need in order to understand what their future will look like and how they can help shape it.

NOTE: This post was updated to reflect that the songwriter ratio is actually 10:1 for semi-interactive radio.  The 2:1 ratio applies to label revenue versus collection society revenue, which includes revenue for performers who are often but not always also the songwriter.