Streaming monetization is polarized between premium subscriptions on one end and free streaming on the other. The middle ground that was the scale heartland of the CD and the download is disappearing and taking with it the mainstream consumer.  It is into this environment Rdio just announced a new $3.99 tier. 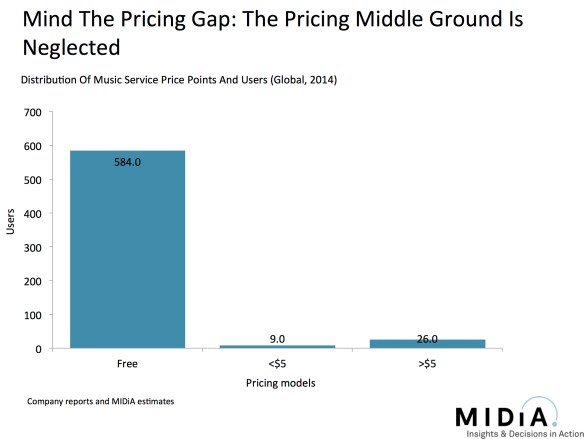 Mid priced subscription tiers are thin on the ground.  We have a couple in the UK (MTV Trax and O2 Tracks from MusicQubed, Blinkbox Music, now owned by Guevara) and a number of ad free radio offerings from Pandora, Rhapsody and Slacker.  It is a heavily underserved segment as the slide above shows.  The mainstream streaming subscription market is squeezed between premium and nothing.  The average music spend of a consumer is around $3 a month, so $9.99 subscriptions are far out of reach of most consumers.  $3.99 however is far, far closer to a realistic price point for the mass market.

Regular readers will know that I have been a long term advocate of lower priced subscriptions and micro-billing / Pay As You Go pricing models to entice the more mainstream user.  The labels have been super cautious because they are scared of cheaper services cannibalizing the premium tier.  The concern is a valid one but ultimately if a bunch of 9.99 users aren’t getting full value from an unlimited service they are going to bail out eventually anyway.  At least with mid priced subscriptions they have somewhere to land instead of disappearing straight to free streaming. 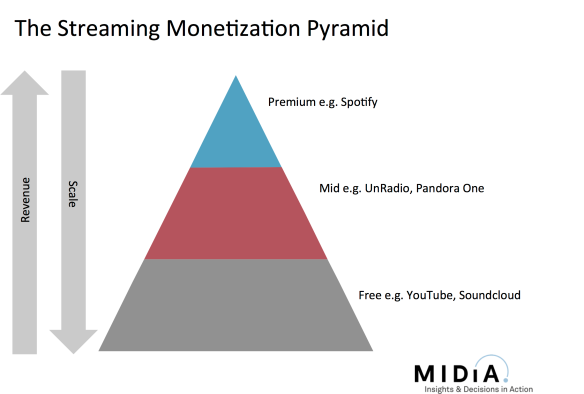 Currently streaming monetization is split between the top and the bottom of the monetization pyramid and this needs to change.  Rdio’s new Select tier gives users ad free radio plus 25 songs of their choice each day. That might not sound like a lot of tracks but for the majority of mass market music listeners that will be more than enough.  In fact in some respects it could almost be too much.  What matters for the mass market listener is less the number of tracks and more how the tracks they like are surfaced to them.  Curation is a much-overused term these days, but expert curation and programming is crucial to engaging the mainstream.  Radio is still so popular because most mainstream consumers are lean back customers that want to be led on a music journey not to have to hack their way through the musical undergrowth themselves.

The leap from zero to 9.99 is far too big and Rdio Select is an important step towards monetizing the revenue no-man’s land between free and premium.  Of course zero to anything is still a major hurdle but the success of iTunes (250 million global buyers) shows us once you make the first step small enough, consumers will follow.  The simple fact is that the streaming market will not be sustainable without the mainstream engaged as paying customers on the same sort of scale that was achieved with downloads.  An even simpler fact is that 9.99 will not achieve that end.

9 thoughts on “Rdio Goes After The Squeezed Middle”