An upfront note: though this post focuses on the UK market, the principles, as you will see, apply across most music markets.

At first glance the UK recorded music market isn’t in too bad shape: album sales declined by a not too worrying 5.6% in 2011 and digital grew solidly, including 26.6% growth in digital albums*.  And of course there was Adele.  So an end of term report card would probably read something like ‘Could do better but good signs of improvement’.  Unfortunately that is a case of papering over the cracks.  Here’s why:

The music industry is being entrapped by a demographic pincer movement: on the left the emerging Digital Natives lack a product strategy that meets their needs, on the right the traditional CD buyers lack a format succession cycle.  This is why the industry is becoming obsessed with squeezing as much ‘ARPU’ as it can out of the remaining core of 20 somethings and 30 somethings.  But of course that strategy can only go so far.  I’ve written at length about strategies for the Digital Natives, but the case for the Digital Refusniks is even more pressing, if less glamorous.  The following needs to happen, and quickly:

The Digital Refusniks are a challenging and unfashionable demographic and the counter-case for addressing them is that in 10 years or so they’ll have disappeared from the market anyway.  My conservative estimates put the loss in the region of 15% to 20% less total UK recorded music revenue in 2016.  The industry may well be able survive its revenue forecasts being that much smaller, but a) does it want to? and b) HMV can’t.

*All sales numbers are BPI trade values.  You can see the complete BPI release here:

Earlier this year I raised the question of whether the music industry was going the way of the newspaper industry, whether its core audience was aging, stuck on its physical format while the younger generation feasted on free content.  It is becoming increasingly clear to me that this dynamic is arguably the most sizeable challenge facing the recorded music industry.  Product innovation (my hobby horse) is of course crucial, but its remit will be drastically reduced unless the ‘CD Problem’ is fixed in tandem.  Indeed, the two are intertwined.

The CD is polarizing the music buying marketplace

The importance of the CD is at serious risk of becoming a hindrance to innovation, particularly as its core customer base becomes more entrenched: 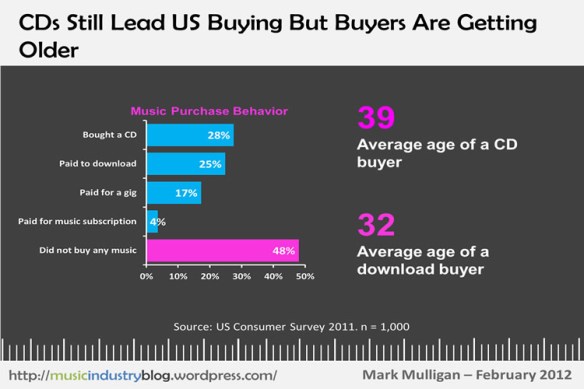 The Digital Refusniks need bringing into the digital realm with hybrid physical-digital products before they simply fall out of the music buying population.  The case for a physical-to-digital transition product strategy is clear, but it needs basing upon a clear understanding of why people value CDs. Across the music industry, consumer research projects must create a detailed and nuanced picture of CD buyers’ wants and needs.

To this end, but in an entirely non-scientific, not statistically significant and largely subjective manner, I yesterday canvassed my Twitter followers with this question: Do you still buy CDs, and if so why?  The results, as long as they are considered in a purely directional and illustrative sense, present some interesting trends (see figure two): 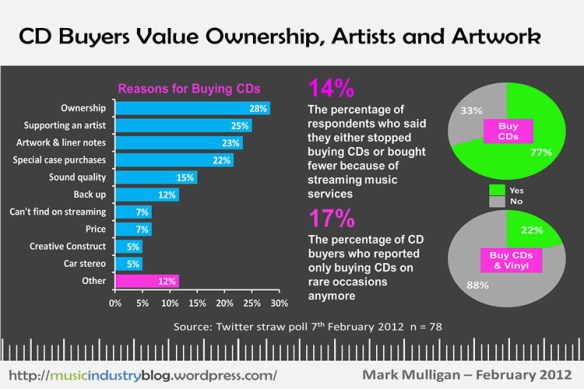 The broad picture is one of the CD as a hybrid of a collector’s item and an honesty box: people buying CDs to support their favourite artists and to own something tangiable and visual.  Perhaps the best label for describing this very specific group of conscientious CD Buyers is Charitable Collectors. Of course the music industry cannot afford for the CD to become relegated to a role as the picture disc of the 21st century.  Also artists should be working out ways to deliver much greater value to their dedicated fans than just a plastic disc which they often don’t even see much income from.  But challenges aside, there is a rich seam of value for music product strategy to tap and to test.

It is important to consider that my Twitter followers skew towards tech-savvy music aficionados so this is more of an insight into the minds of digital music fans who also still value CDs rather than the Digital Refusniks.  Nonetheless there are some key learnings here which translate across both groups and which, if nothing else, provide some solid foundations for exploring just what the industry should be asking about to truly understand the diverse priorities of CD buyers. 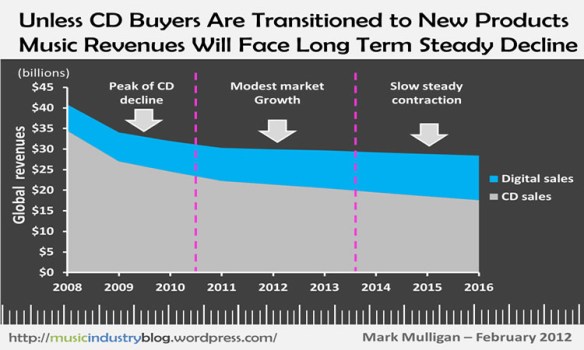 Finally, the revenue case for a physical-to-digital transition product strategy is simple: unless it happens music revenues will decline.  Figure three shows a scenario forecast for global music sales that assumes that things stay the same as they are now i.e. that digital growth remains around the 7 to 8 percent mark and that CD revenue decline slows, as sales consolidate around the hardcore of Digital Refusniks and Charitable Collectors.  In this scenario we will most likely see some modest growth by 2012 and 2013 but after that the market will enter steady decline despite continued digital growth.  The reason for this is twofold:

The CD remains one of the music industry’s most valuable assets, second only to those consumers who are still its loyal buyers.  Now those consumers need a new generation of music products that meet their needs in a way that downloads and streams clearly do not.